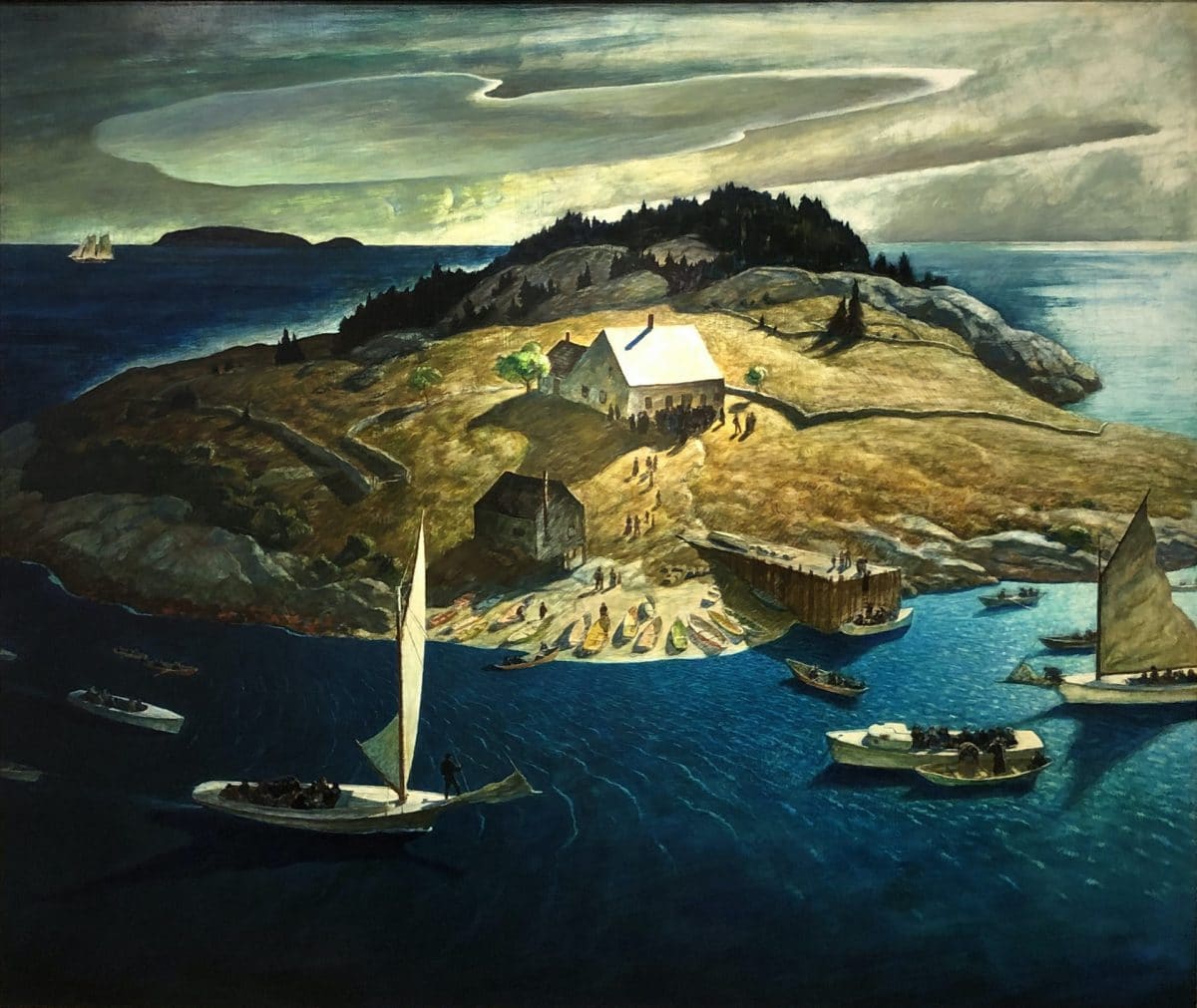 N.C. Wyeth: New Perspectives at the Portland Museum of Art, open through January 12, 2020 is a luminous show cataloging the development of Wyeth and his craft as an artist.

N.C. Wyeth’s work as well as that of his son Andrew (the painter of the iconic Christina’s World), and grandson Jamie, have made the Wyeth family into a well-known dynasty of American artists.

As suggests the title, New Perspectives focuses exclusively on N.C. Wyeth’s work, drawing from both his fine art and his work as an illustrator. The pieces are beautiful, arresting with their bright and rich colors, and give a whole new level of appreciation to the patriarch of the Wyeth family.

From his beginnings as an illustrator, Wyeth’s use of color and perspective give drama to all his work and show mastery of his craft.

Even the simple endpapers of Treasure Island (below) become rich and exciting in Wyeth’s hands, with a tightly composed image; including a lemon-yellow sky and heavily muscled pirates as they trudge across the canvas.

Wyeth again uses the confines of his canvas to tightly frames a perilous mountain journey, leaving only a claustrophobic sliver of sky visible. The viewer feels the drama that Wyeth imbues into this piece through his masterful use of scale, composition and color (note how daylight is waning, the shadow seems to creep up the mountainside in the distance, leading to an additional sense of urgency, beyond that of the steep cliffside).

September Afternoon like those pieces mentioned previously uses only a small portion of the sky, suggesting that focus on the terrestrial was a stylistic choice. We see the sky reflected in the water, but the artist is clearly focused on earthly happenings rather than giving a sense of space or air to his work.

Fourteen years later finds Wyeth experimenting with a wholly different look than the “Divisionist” style he used in 1916’s September Afternoon. However, Wyeth continues to only use a fragment of sky in his work, preferring to continue to focus on landscape, livestock and humans.

Spring – 1918, an image of Wyeth’s parents, is a fascinating look into the use of perspective. A tension-filled scene is set, with a man waiting patiently in the foreground while his wife reads their son’s letter from the warfront of the Great War. Both are shadowed with a mysterious light coming from behind them. Bare branches from dark trees crowd in from both sides, obscuring the ominous sky and casting shadows. The fields are bare, nothing has grown of yet in that spring of 1918. Perhaps the date represents hope: that one has to, even in the darkest moments, hope that spring will come again. Certainly these parents have to hope for their son’s return.

The way in which Wyeth illuminated Spring – 1918, with light hitting only the mid-ground and leaving the couple in the shadows, makes for a first glimpse into his stylistic choices. Wyeth often skirted the realism of how a scene was lit and instead used light and shadow to increase the symbolism and layered meaning in a piece.

Wyeth’s Use of Color and Light

Wyeth’s work from the late 1930s are striking. The colors stand out as otherworldly and modern, despite their age. They also have a similar theme that connects all his work: patches of deep shadow and others of bright illumination, often not corresponding to the location of the sun.

As the sun cannot alway account for the illumination nor shadow in Wyeth’s pieces, items in the paintings, such as (above) the house in Bright and Fair, the row boat in Black Spruce Ledge and the rowboat full of fish in Dark Harbor Fishermen (below) seem to possess their own inner glow rather than reflect daylight.

Shadows certainly exist in Wyeth’s pieces, but they are neither stark nor accurate enough to account for how he lights his work. Instead, the paintings have an otherworldly glow that adds to their charm and beauty by being slightly less than realistic.

Wyeth’s use of color, composition and his ability to create a luminous texture with his paintbrush leaves a legacy of work unlike almost any other artist. His unique style and rich color palette encourages viewers to be drawn further into his artwork and engage with his art.

N.C. Wyeth: New Perspectives is an exceptional show filled with pieces to study and admire in-depth. A visit to Portland before January 12th to see the show is highly recommended!