Benin Bronzes seem to be a hot topic these days with many articles cropping up talking about them, and the perspective on the Benin Bronze debate and what should happen to them may depend on to whom you are speaking. Museum curators might think they are best protected in their current homes, whereas individuals focused on postcolonialism and social justice and arguing for their return to their place of origin. 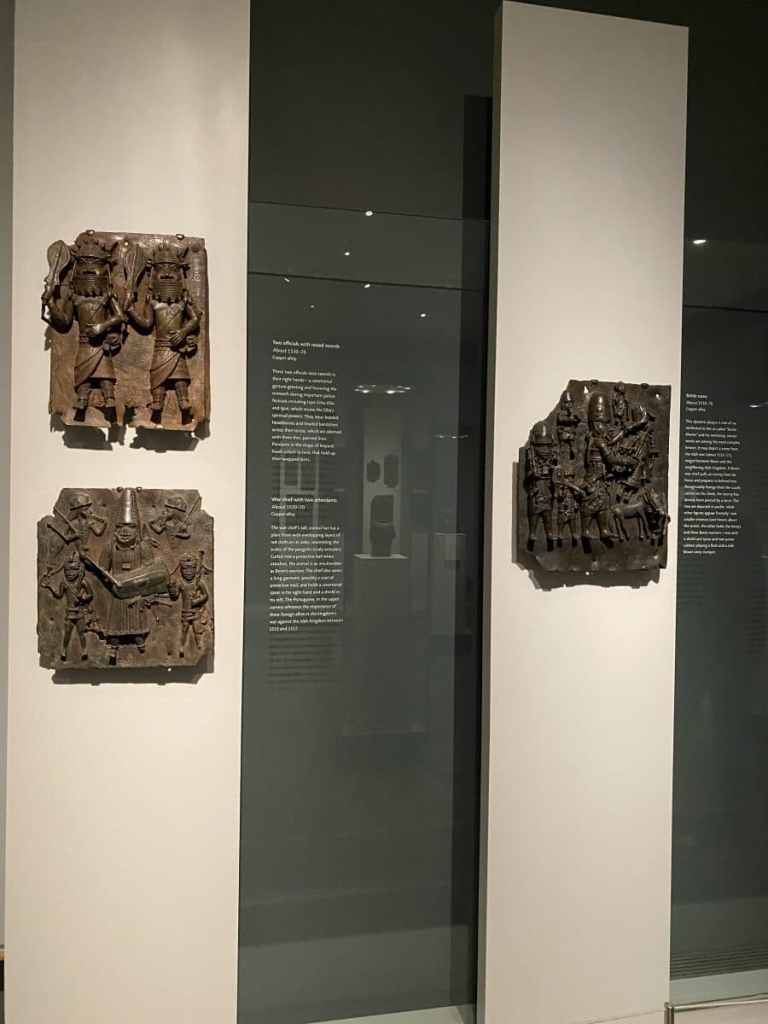 As such, here’s a brief overview of what these amazing pieces of artwork are, as well as why everyone is debating what should be done with them. The question of collecting work from other countries is something Thoughts on Art has discussed in some other articles such as The Pergamon Museum and Collecting Abroad.

What are the Benin Bronzes?

Where are the Benin Bronzes From? Are they from Benin? 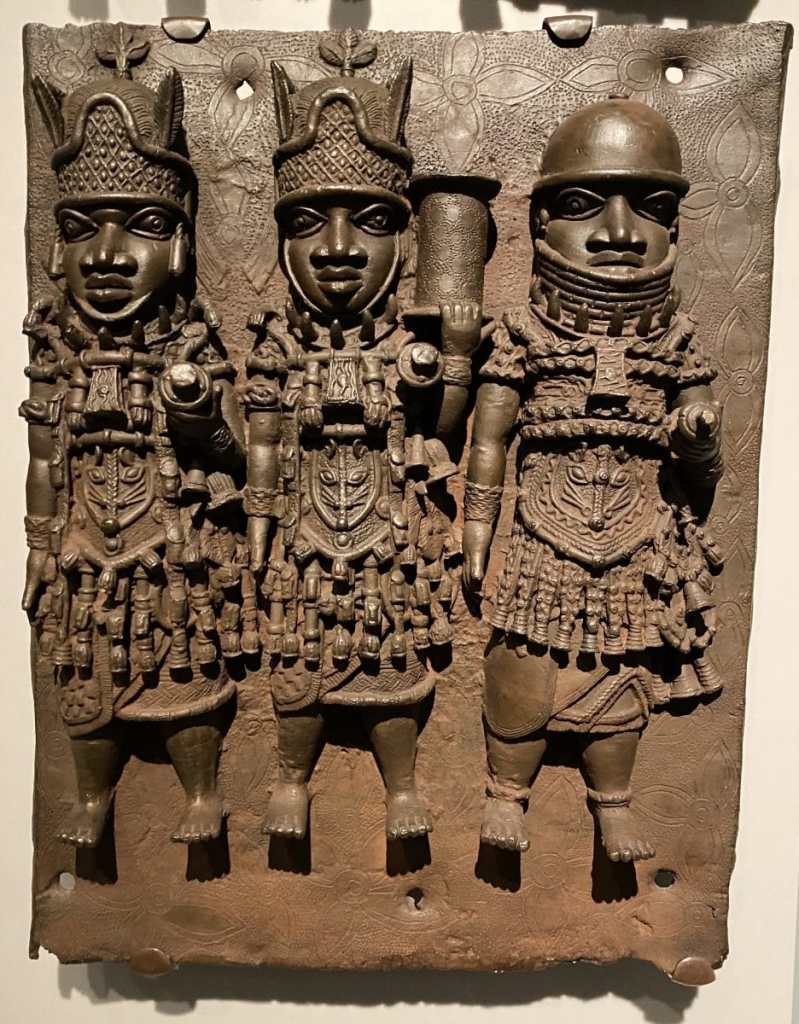 The first thing to know is that the Benin Bronzes are not from Benin. They are from the Benin Kingdom, an area of what is now Nigeria. The Benin Kingdom ruled for centuries over the Edo people. This area is now part of Nigeria.

In 1897 after Edo soldiers killed an exploratory mission into the Benin Kingdom, the British sent out a punitive expedition with the specific task of punishment.

Amongst the many indignities suffered by the Edo people, thousands of the Benin Bronzes were looted from the palace as spoils of war. Individual soldiers carried them home and either displayed them or sold them. Others ended up in the British Museum or in other museums around the world.

How were the Benin Bronzes made?

The Benin Bronzes are individually produced metal sculptures. They were (and are) produced using the lost-wax casting method which means that the mold is destroyed in the casting of the piece. Thus each is inherently unique – even for the dozen or so Mounted Ruler pieces such as the one pictured below that is part of Boston’s Museum of Fine Arts collection. 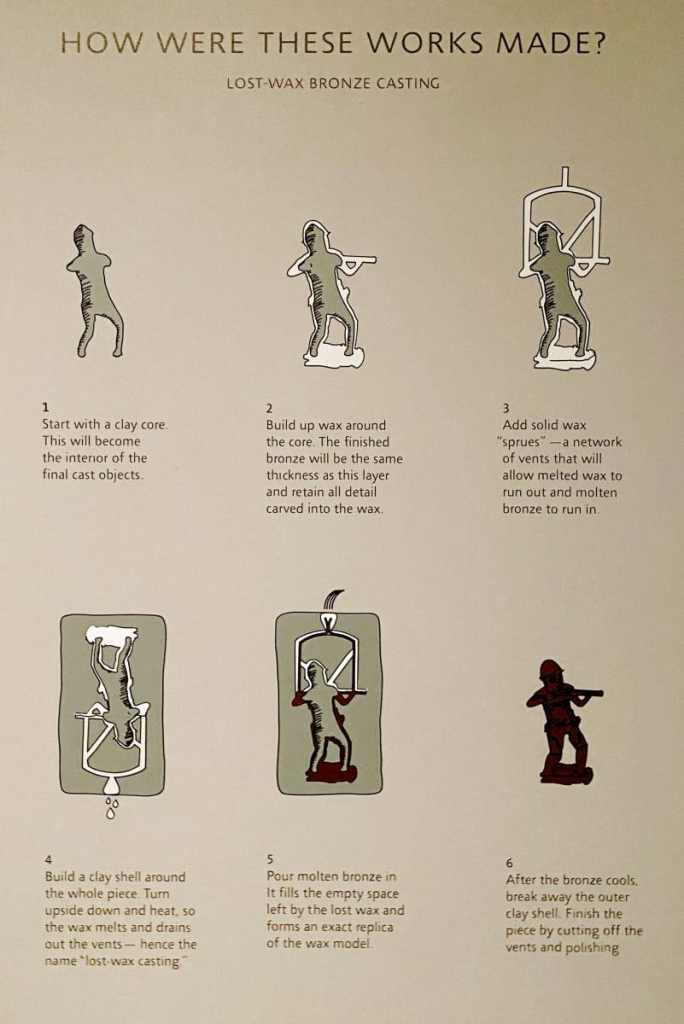 How were the Benin Bronzes originally used?

The pieces are both freestanding sculptures such as the Mounted Ruler, and ivory amulets but some of the most well-known are plaques meant to decorate columns. 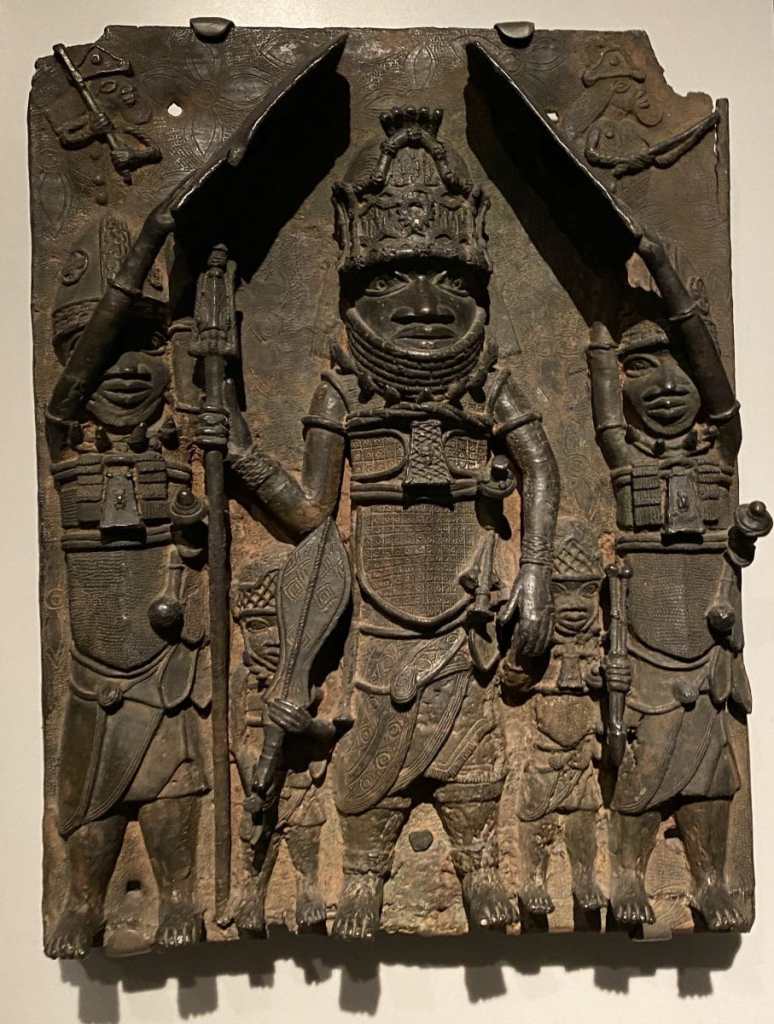 The freestanding works often decorated altars dedicated to the ancestors of the current Oba, or ruler of the Benin Kingdom. The works played a ritual role, venerated a royal ancestor or warrior or a vanquished enemy.

Are the Benin Bronzes really Bronze? 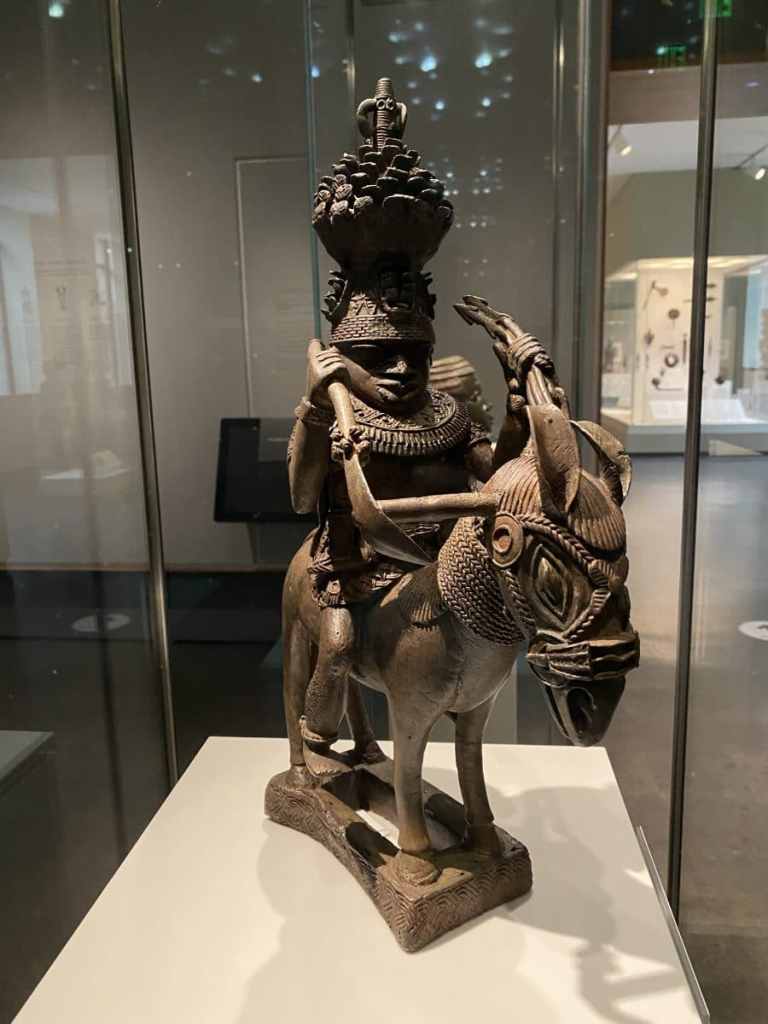 No, many are not! In fact, many of the Benin Bronzes, including the Horseman pictured above, are made of cast brass. Others are made of ivory. One theory as to why these pieces are called Benin Bronzes is that brass is often conflated with new and shiny works, whereas bronze is associated with higher quality metalworking and a dark patina.

The lost wax casting method has been used in West Africa for centuries. The raw materials to cast the bronzes necessary often required long-distance trade within the African continent.[1]

Interestingly, In the 16th century, a strengthening of the Benin Kingdom’s economic ties with Europe, and in particular Portugal, provided a more consistent supply of copper.[2] This increased supply of raw materials meant that the Benin Bronzes, at least from that point onwards, were often made metal imported from Europe.

Where can I see Benin Bronzes now?

Today, thousands of the best and oldest Benin Bronzes are found in museums and private collections around the world, mostly in the northern hemisphere.  The British Museum holds a vast collection. . Boston’s Museum of Fine Arts received a significant donation of Benin Bronzes from Robert Owen Lehman in 2012.

Many museums in the US and Europe have a collection of Benin Bronzes. These include The Met, the MFA Boston, the British Museum,  the Pitt-Rivers Museum the Musée du Quai Branly–Jacques Chirac, and many others. While 161 institutions have acquired Benin Bronzes, only 9 Nigerian ones hold such items. [3] 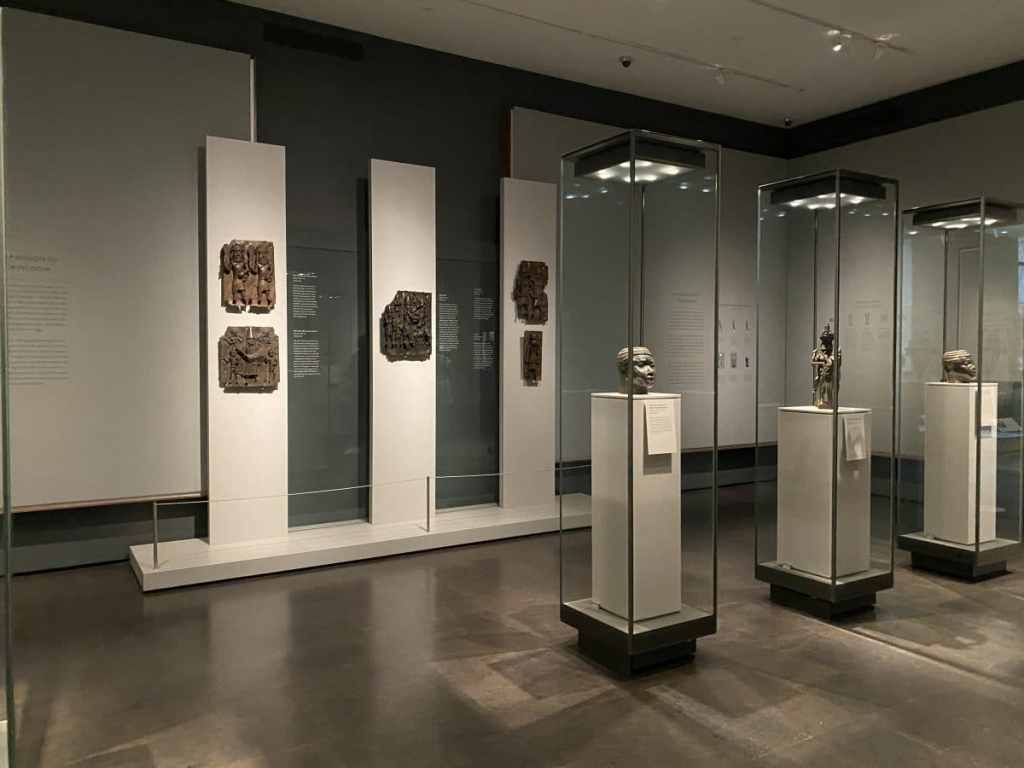 Why are people upset about the Benin Bronzes?

As mentioned above, these items were removed from what is now Nigeria in 1897. The British sent out a punitive expedition with the specific task of punishment and took these pieces of artwork back to Europe as war booty.

Many people are upset these items still being traded back and forth amongst private collectors and institutions. Most of them are the looted heritage of what is now Nigeria, and many feel they should be returned to their original possessors. 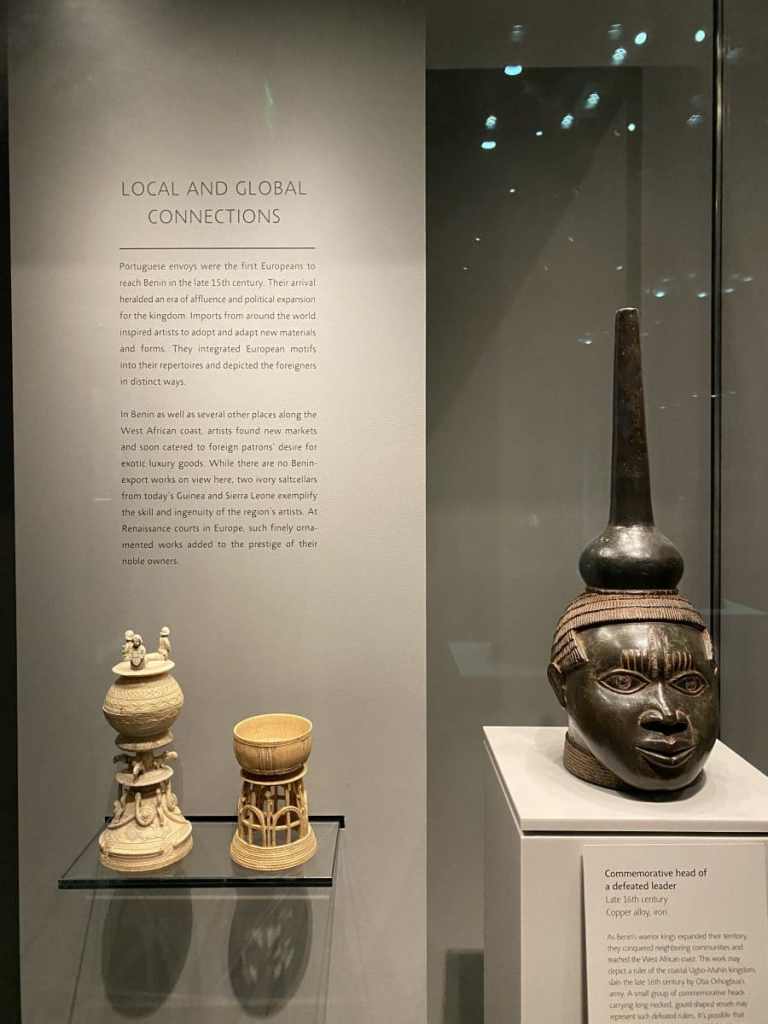 The ‘punishment’ meted out by the British at the end of the 19th century is still keenly felt as a relic of the colonial era. Holding the Benin Bronzes in foreign institutions feels to many as a maintenance of an unequal power structure between Northern and Southern Hemisphere countries and institutions.

Should the Benin Bronzes be returned?

The question of what to do with the Benin Bronzes is complex. 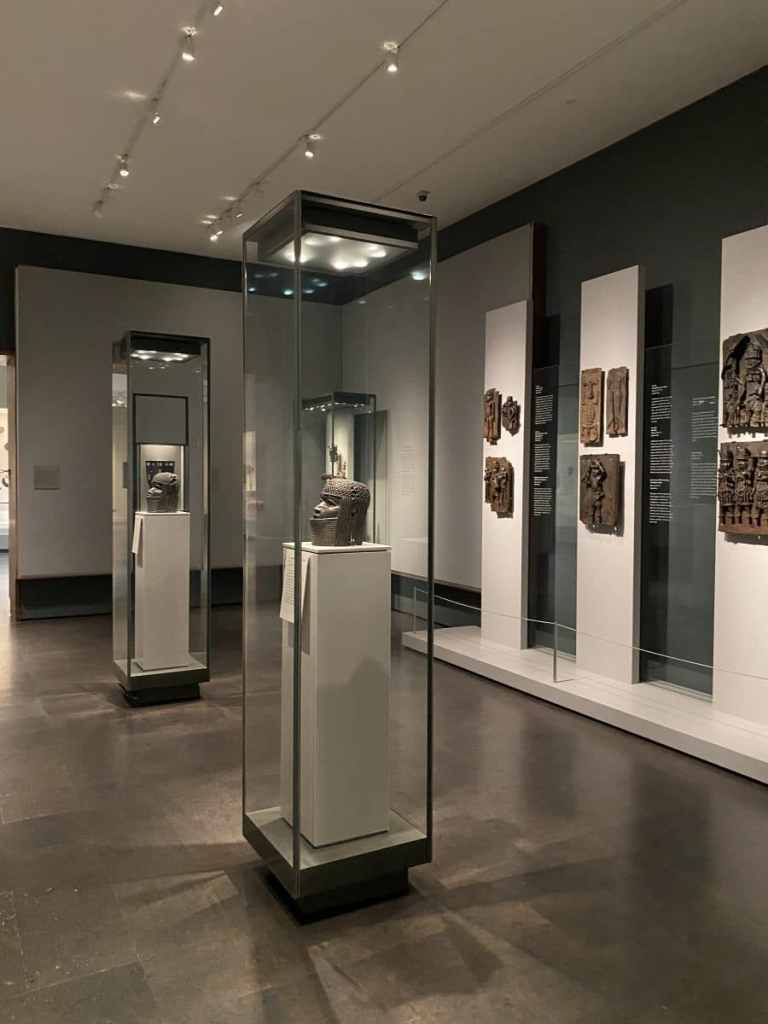 Who would be the owner?

Both the Nigerian Government and the inheritor of the Benin Kingdom, the current Oba (40th Oba Ewuare II) could legitimately claim ownership over the items looted by the British. This is a conveniently distracting question of to whom the items should be returned.

Arguments for keeping them in the West

Those countries and museums who have yet to pledge the return of these artifacts claim they are the “world’s heritage” rather than simply Nigeria’s, the truth is that the originators of these marvelous works of art are often unable to see the most exquisite examples. This is a true imbalance and one of the lingering side-effects of colonialism. It is also a situation that could be rectified, given the right circumstances and a supportive populace.

There is also a significant amount of gridlock around the repatriation of these items that stem from racism and colonial paternalism. For instance, it’s often suggested that “The Nigerians can’t possibly care for their patrimony as well as we in the ‘West’ could…” Whereas in fact, a study has shown the bronzes are just as safe in Nigeria as anywhere else.

Returning the Benin Bronzes to Nigeria

Nonetheless, the restitution of these thousands of items has been a mere trickle in the past. It has appeared as though most institutions agreed, until recently that the statute of limitations on items looted in 1897 had run out. However, some museums are starting to plan for their return, starting in 2025.

If we can agree that the statute of limitations for righting the wrongs of the past never truly runs out, it is time to acknowledge that while we may not have been the perpetrated of the sins wrought upon the Edo people, we can help to repair the damage done.

Where can I learn even more about the Benin Bronzes?

It’s definitely worth researching if you want to learn more about this rich heritage.

There are many articles and books that have been written on the subject of the Benin Bronzes, both delving into their history, speculating and establishing the uses for the various sculptures, and discussing their future. There are scholars who have devoted their careers to the topic.