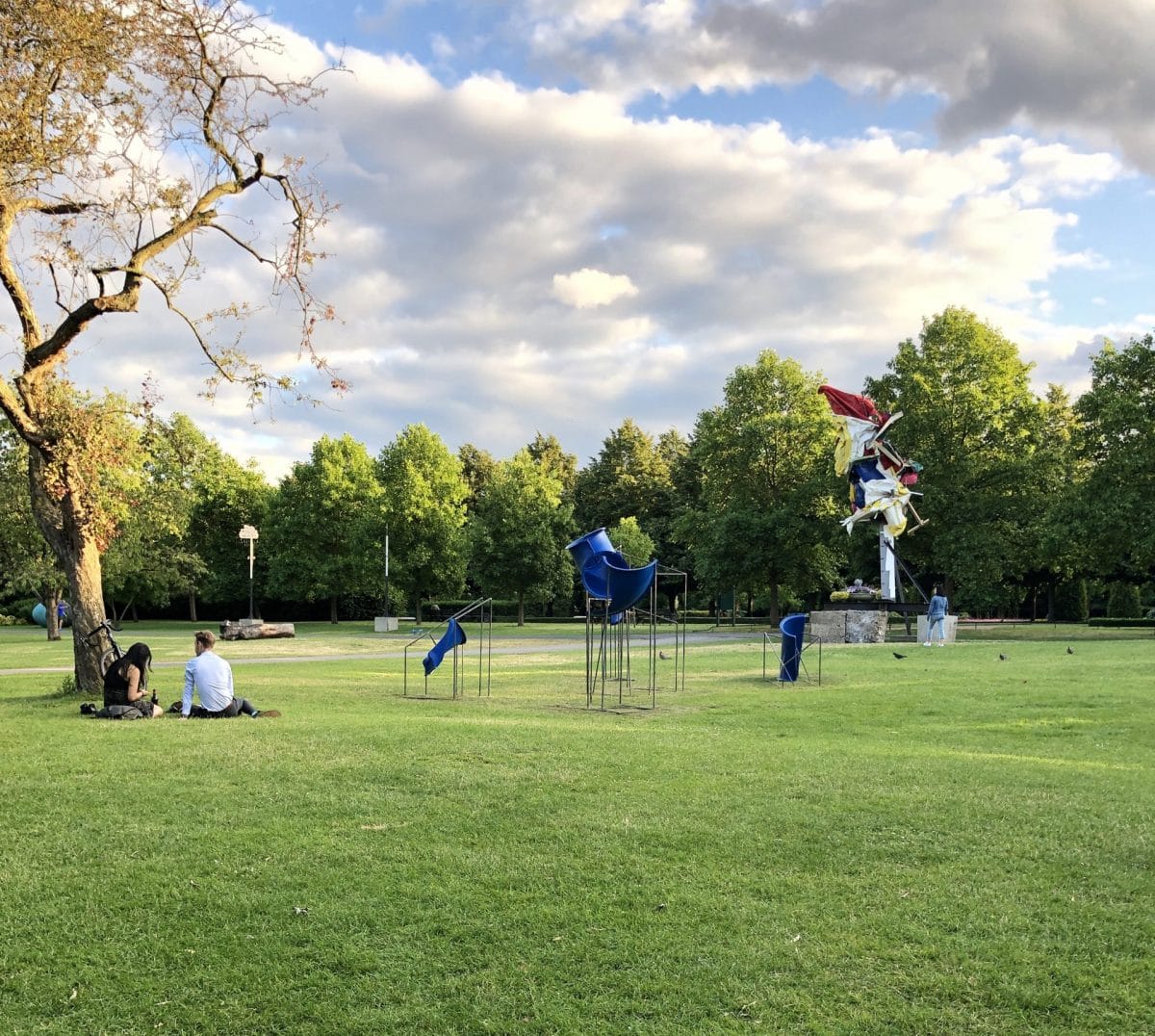 I was lucky enough to visit London right at the start of Frieze Sculpture. As a result, I had the opportunity to discover this exceptional exhibition organically when visiting Regent’s Park with my family just a day or two before it officially to the public.

Stumbling upon this sign, my eyes grew wide, as if I had found a treasure in the forest. I immediately dragged my youngest son, Ryan, off to see as many pieces as he would let me (you can spot him in the red shirt in some photos), while my husband and older son played “soccer/football” together.

Tracy Emin, When I Sleep

I was keen to see Tracy Emin’s piece (#17) most of all, as I was familiar with some of her other work, including (arguably) her most famous, My Bed, and was curious to see how she would present a piece with thematically similar title to her most famous work.

As it turns out, Emin is nothing if not a master of many media, as her many diverse types of work can attest.

When I Sleep, seems to depict a sleeping individual, cast in bronze. The descriptive plate next to the sculpture says the following:

“A bronze sculpture portrays a reclining female figure. Curled up in a foetal pose, her vulnerability form s a contrast to the weight and density of the sculpture’s material.”

This description exists as an excellent jumping-off point for a brief examination of this piece.

Emin’s sculpture does indeed come across as both vulnerable yet weak. This paradox, not only evident in the positioning of the form and the material choice, is also visible in aspects of the figure itself. The limbs are small and malformed, disproportionate in size in comparison to the rest of the body.

While the curled back (lower right photo) seems to suggest a “typical” female form with shoulders, a curved waist and hips, a closer look suggests this is only an illusory equivalency. In this same photo, in the lumbar region, one sees a series of nodes. This immediately made me think of either spina bifida or simply a metaphorical exposure of the spine.

The artist is exposing vulnerability throughout this piece: through this lumbar “lesion”, the weak arms and legs, the fetal position, and the mere fact of the title being When I Sleep. There is no time that a human being (or, in fact, any animal) is more vulnerable than when sleeping.

I would leave it up to each individual to contemplate their own vulnerabilities when confronted with this powerful work of art. Why would you curl up into a ball in bed at night? All of us have done it at one time or another, but everyone has their own reasons.

Rajkowska’s piece, The Hatchling, (#8) catches one’s eye from across the park. The vibrant blue and mottled brown give it a natural appearance of an overgrown egg. But was that all ?

The Hatchling is described as “Mixed Media” and the accompanying text reads as follows:

“The Hatchling is a large-scale replica of a blackbird, one of Britain’s most common birds. Emitting the sounds of hatching eggs, it invites one to come closer and listen carefully.

The video below may help to demonstrate the subtle audio appeal of this piece.

Pousttchi’s Alexander (#19) takes a quotidian material, and reimagines it into a piece of artwork that makes the viewer take a second look.

As the descriptive plate states,

“Alexander develops Pousttchi’s preoccupation with the structures of urban fabric. Using street bollards as material, the transformation of an everyday street object creates a multi-layered appearance.”

The form of the bollards suggests two groups of humans. Perhaps this is an anthropomorphism of these traffic regulation tools, but the manner in which they have been twisted and bent suggests a huddling of humans together. Many seem to lean into each other, perhaps in grief or mutual support. A chasm exists between the two sets of bollards, with the grouping on the left smaller than that on the right.

One wonders where the title Alexander may have come from. Is that the name of the bollard for whom the others grieve?

Fisk’s Tudor Ball (#22) is a delightful reimagining of the traditional English Tudor.

As described in the original Frieze description,

Fisk has long used the sphere as a device to reframe objects for our consideration. In this case, Fisk presents an example of quintessential English vernacular architecture as a painstakingly crafted icon.

I immediately fell in love with the playful nature of this piece. A round home with no door?! Its perfectly impractical nature appealed to the side of me that loves surrealism. Its perfection (especially in the first day or two of the exhibition… I pray that all these pieces are properly respected by the public), the faux “wattle and daub” perfectly white, the geraniums perky (would someone be watering them?) was endearing.

Young’s Solar Disc III is one of the more understated pieces in the 2019 Frieze Sculpture selection. Nonetheless, it is impressive to behold as it looms above the viewer, and the detailing of its natural form inspires close inspection.

Frieze describes it as follows:

The disc conjures the shape of our solar system, our planet, the moon, the sun, the eye, the mother’s breast, the galaxy. The circle is a line that never ends, the all-inclusive singularity.

While this description is a bit over the top in terms of the many circular, disk-like or spherical forms it mentions (which is it?), it is certainly true that this angle-free form holds a special place in human culture.

Despite the micro to macro listing of circular or spheres, I prefer to examine the cosmic as opposed to the human side of the Solar Disc III‘s appeal. The variegated colors and texture draw the eye, while the honed edges speak to the workmanship of the piece. The disc stood out against the green of the trees and the azure sky during our visit. This heavenly body is a meditative piece that is as much suited to an outdoor setting in this park as it could be inside someone’s (larger) home – a rare piece in the selected that achieves this feat in scale and form.

Robert Indiana, ONE through ZERO

Indiana’s ONE through ZERO are an example of a series of pieces that are significantly improved by understanding the artist’s intention behind the work. When one first sees them, one is confronted with the enormous metal numbers on small black pedestals.

As Frieze describes the work,

ONE through ZERO is a monumental example of Indiana’s long-held fascination with the power of numbers – with One representing birth, ascending through adolescense to maturity, ending with Zero, which stands for death.

Knowing the order in which to look at the numbers (they are in a large circle with one and zero next to each other) as well as their association with the various stages of life permits an increased appreciation of the work.

As an aside, my personal curiosity led me to look into the font that Indiana uses. A brief search suggests that he works off something similar to “Clarendon Black” but that he was initially inspired by the “robust Arabic numerals of an old printer’s calendar.”

This exhibition was a delightful way to discover a corner of Regent’s Park and to meditate on three-dimensional art. The setting in the park allowed for the installation of some larger pieces and more interactive works than one would usually see in gallery or art fair settings. While some pieces were less engaging than others, it’s clear that such an initiative by Frieze is admirable and will help to engage the larger community in the arts – beyond just those who wish to or can afford to attend art fairs. Well done!