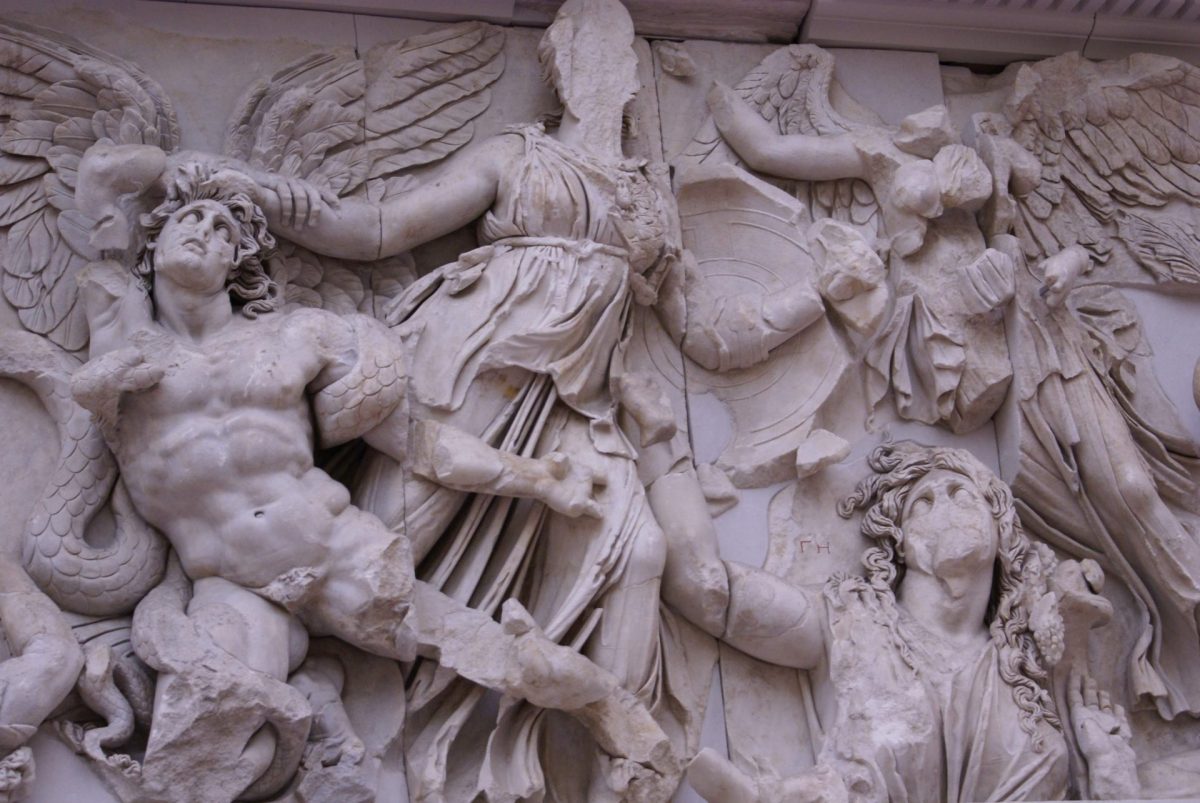 Being in lockdown has been a great time to revisit photographs of places and museums from my years living in Paris (2004-2010).

A December visit to Berlin, Germany with friends was punctuated with many adventures including shopping at Christmas markets, a late-night visit into an artist squat (the now-defunct Kunsthaus Tacheles) as well as the Pergamon Museum.

Visiting Tacheles was like stepping into another world. It was a graffiti-covered apartment block where you could simply wander from room to room. It was perfectly safe, with a restaurant/cafe and artists studios, but it definitely felt out of my comfort zone and still remains one of the most unique places I visited in Europe.

Seeing the Berlin Wall, as a child of the Cold War years, having watched the wall fall live on TV, was also exceptional.

The true intent of this post, however, is a meditation on The Pergamon Museum, on Berlin’s Museum Island. The largest and most frequented museum in Germany, it was one of the most memorable places visited, mostly because it houses enormous and stunning pieces of ancient architecture. According to Google Arts & Culture it is quite literally the host of largest monumental works in a museum around the world.

I have many issues with antiquities being brought to Europe from their places of origin, and this post will examine both the pieces on view as well as give a bit of information on how they arrived there. It will not be a treatise of the ethics of their removal, although know that it makes me uncomfortable – despite the fact that the practice most likely “saved” certain items from reuse or continued oblivion.

Interestingly, Atlas Obscura suggests that while many rightly imply Germany should return any/all looted works to Turkey, many pieces originally in the Pergamon Museum are actually twice-looted. During World War II the museum was significantly damaged and Red Army soldiers collected many loose pieces for “safekeeping”. While many were returned, some ended up back in Russia and are now housed at the Pushkin Museum and the Hermitage. This leads one to wonder: should such pieces be sent directly back to Turkey? Or back to Germany to then be sent back to Turkey?

Of all the pieces in the museum, the Altar of Zeus was found at the namesake location of the institution. This enormous altar was excavated from the town of Pergamon (now called Bergama, Turkey) in the 1870s and 1880s by German engineer Carl Humann. The goal was to rescue the friezes and reveal the foundations. An agreement was made (most likely as payment for the excavation) where the frieze fragments (and it seems some of the structure itself) became property of the Berlin museums.

Unique in the Ancient World, construction of the Altar took some twenty years. Its architectural and artistic richness is unequaled, and with a floor area of 1200 m² it was of an impressive size. Its base was ornamented all round with a unique two-and-a-half meter high frieze.

The dramatic poses, sculpted muscles and imposing size of the altar are impressive. One can have an “immersive” experience of the Pergamon Museum via “Google Arts & Culture“.

The beauty of the items demonstrates the facility of the ancients with marble sculpting, but one cannot help but think of the Elgin Marbles. Both the British Museum and the Pergamon find themselves in a situation where the original country of origin could benefit from the return of these pieces.

Interestingly, an individual usually strongly in favor of the return of looted pieces of artwork, Ozgen Acar, is quoted as being happy items such as the Elgin Marbles and the Pergamon were removed from their homes in the 18th and 19th century. But don’t let that fool you: he wants them back. He just recognizes that the removal may have allowed the pieces to be saved.

“I’m very happy these pieces were carried away in the eighteenth or nineteenth centuries… If not, piece by piece, those marbles would have been used to build mosques or churches. Luckily they were taken away and protected on behalf of mankind. But today we live in the modern world… The Elgin Marbles and the Altar of Zeus will return home. They must return and be displayed in their original places. But for today let’s keep them where they are.”

Ozgen Acar, quoted in Loot: The Battle over the Stolen Treasures of the Ancient World
By Sharon Waxman

So what will be the timeline for this work to be returned? That remains to be seen. When will Europe (and the US, and other former colonial powers) loosen their grip on these monuments to humanity’s rich cultural heritage?

The Processional Way and the Ishtar Gate from ancient Babylon dating from the 6th Century B.C.E. are also housed in the museum under skylights that allow natural light to filter down.

The gate was originally excavated brick by brick (or fragment thereof) in a project overseen by Robert Koldewey – a German archaeologist. More than 200 people worked daily on the site, year round, for fifteen years (1) Let us note here that the efforts by locals were not recorded or lauded – only that of the European overseeing the project.

This was such an enormous palace (and excavation project) that pieces of it reside in museums around the world:

While I laud the “spreading of the wealth”, note that the only museum holding a portion of this patrimony outside of what is nominally considered the “West” is in Istanbul. I believe it’s time that museums in the West consider their entire collections and what and how should be returned to its original countries of origin. I laud Musee Quai Branly for promising to return looted items to Benin – and I hope to see more similar actions.

(Sidenote: what remained on site as well as a replica gate created by Saddam Hussein was damaged by coalition troops following the start of the war in Iraq in 2003.) Thus, not only have westerners arguably looted these sites, but they have also contributed to the destruction of what was left behind.

Dating from the 700s, the unfinished Qasr Mshatta means ‘winter palace’. It was thus named by the Bedouin Arabs who were the sole visitors to the area for centuries. The ruins still sit near Amman (see image below), although the striking facade is now in Berlin.

Regarding how it ended up in Berlin, per archnet.org: “The most beautiful feature of Mshatta… remains in the rich and intricately carved features on its southern exterior, a significant section of which was given to Kaiser Wilhelm as a gift from the Ottoman sultan ‘Abd al-Hamid just before World War I and today is located in the Pergamon Museum in Berlin.”

Thus, this item was gifted to Kaiser Wilhelm II (the last King/Emperor of Prussia) from Ottoman sultan ‘Abd al-Hamid (most likely Abdul Hamid II aka Sultan Abdülhamid II), the last Ottoman Sultan. The irony of two extinct powers having traded this work of art should not be lost on modern-day viewers.

Miletus is located in Turkey’s Aydin province. This market gate was constructed during the reign of Hadrian (2nd century AD) but destroyed during an earthquake about 800 years later. “The remains came to light again during excavations between 1903 and 1905, lead by a team of German archaeologists. Back then the understanding was that those who funded excavations received a portion of the finds. And so the remains of the gate were shipped back to Berlin in 1907/1908.” (2) It’s hard to see how this could be considered ethical – I look forward to researching this practice more in the future.

This item was not on display when I visited the museum – it was undergoing a restoration. I’m sad to have missed it as the visit to the Pergamon reminded me of my love for ancient history with its simple, clean lines. I only wish (again) we could be seeing these items in Turkey and Jordan instead of in a museum in Germany…

The beauty is in the details

While the Pergamon wows with its huge architectural conquests, it doesn’t skimp on the details either. I found the smaller pieces charming.

It was (and is) hard to make sense of the Pergamon Museum. Dedicated to items shipped from faraway lands, it’s a monument to the artistry and ingenuity humanity expressed thousands of years ago. At the same time, it also stands as a reminder of looted heritage.

As our countries globalize is it still necessary to maintain these items far from their place of origin? When will institutions decide that it’s “time” to return them? How many items of cultural heritage in storage – not even on display(!) – across Europe and North America?

The archeologists and original collectors of these pieces have passed on. The debt has been paid for their efforts. In my opinion it’s time for museums to start repatriating objects when possible.

To read more on my thoughts on the subject check out: “The Wellcome Collection Part II – Private collecting abroad and its complexities”

There’s also a great article in History Today that examines this delicate topic from multiple angles. Check it out here.