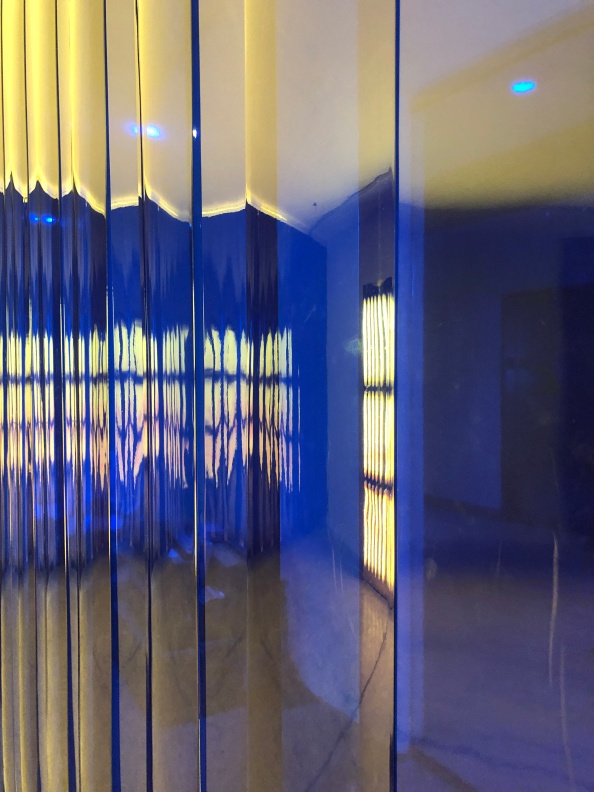 I was lucky enough to have the chance to walk through the SoWa galleries of Boston a few weekends ago. Beacon Gallery had hosted an artist talk and Caron Tabb volunteered to gallery sit for a bit afterwards.

I always love seeing what is happening in the neighborhood – especially when the cool, crisp air of autumn makes a meander around even more enjoyable.

One piece I knew I wanted to check out was Clint Baclawski’s “Fringe”, showing at Abigail Olgivy Gallery.

As it turned out, I left my visit to the last minute and almost missed the show entirely. I arrived approximately 5 minutes before the artist arrived to start the deinstall.

In fact, having the opportunity to chat with Baclawski made the experience of “Fringe” that much more memorable. Learning that it look 50 hours to install the work gave me a new appreciation for the complexity of the piece. And looking closely at how the workmanship and assembly was a pleasure in itself.

While Fringe may seem site-specific to the gallery in which it showed, I could easily see it in an institutional setting elsewhere. It’s at its heart an experience, and certainly more accessible than many other installations one encounters.

From the outside, the piece is a curtain of blue PVC strip curtain. Yellow light emanates from underneath, seeping out and inviting one to part the curtain and enter. The transparent curtain both reveals and hides what lies inside: the colors are shifted, and yet one sees that there is a expansive light installation waiting to be discovered.

The scent of the PVC and the texture of the PVC create a sense of the very “new”: these are modern materials, and attach to the curved metal track on the ceiling with hundreds of rivets.

As one’s eyes adjust, details of the piece emerge. The light installation isn’t as simple as it might originally appear: there is an image on the wall of light, and a mirrored image behind it. It’s a puzzle to decode for the dedicated viewer.

With Baclawski’s help, I learned that it was the image of a church taken near the Grand Canyon. Photographed on 4×5 negative plate, Baclawski has kept the piece in its raw, natural state. Every speck of dust and scratch found on the negative is present on the image wrapping the light tubes.

One could spend hours on the symbolism of the artist’s choice of a religious institution for this imperfect image. While it may have been fate that led to this particular negative plate being accidentally exposed and hence shifting to yellow, the overall effect of the piece is that much more profound thanks to the coincidence of the subject matter, the color shift, as well as the choices made by the artist.

I look forward to seeing more of Baclawski’s ambitious works in the future, as this is an artist with a unique concept and vision.